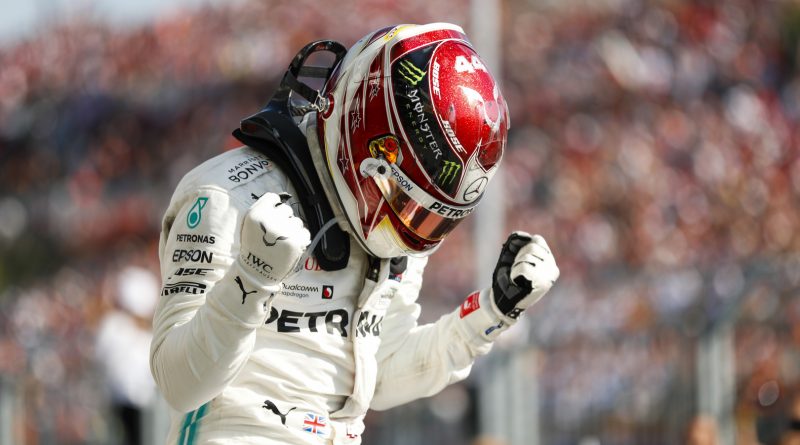 Lewis Hamilton drove over his head in Hungary to win a very close race with Max Verstappen taking the fastest lap and lap record trophy on the last lap of the race! Max Verstappen led the race immediately from pole position and it looked like a start to finish victory coming up for him but just twenty odd laps from the end, Mercedes played their ace card, calling Hamilton into the pits for fresh tyres. The stop made Hamilton 20 seconds behind Verstappen in the lead and hence he had to gain a second lap for all the laps left! Hamilton on new tyres was about a second a lap quicker than Verstappen on old tyres, and the race was on. Relentlessly with both drivers giving all they had we saw a wonderful demonstration of the hound hunting the rabbit. With just two laps left the Englishman passed the Dutchman for the lead and that was that. Verstappen shot into the pits for fresh rubber in an effort to score a bonus point for fastest lap of the race. This he did with consummate ease and both drivers had to be pleased with themselves for their great efforts. It had been a very exciting race for all spectators on television or at the track but what about all of the others, who had also given their best?

The two Ferrari’s had been over shadowed by Verstappen who seems  to have taken on a new role of second best contender in the field. Sebastian Vettel beat Charles Leclerc by 65 seconds and this time around had the better race of the two team mates, who finished 3rd and 4th. Carlos Sainz was a surprise 5th in his Renault after a very good drive and Pierre Gasly only 6th in the other and equal Red Bull to Verstappen’s, a full lap behind the leaders! Unless Gasly’s performance drastically improves soon he will lose his seat to probably Danill  Kvyat  or Alexander Albon from Toro Rosso. Kimi Raikkonen did well in 7th, Valtteri Bottas poorly in 8th, while Lando Norris and Elbon finished 9th and 10th. It was a great race and now we have to wait almost a month after the summer break for the magic of Spa in Belgium.