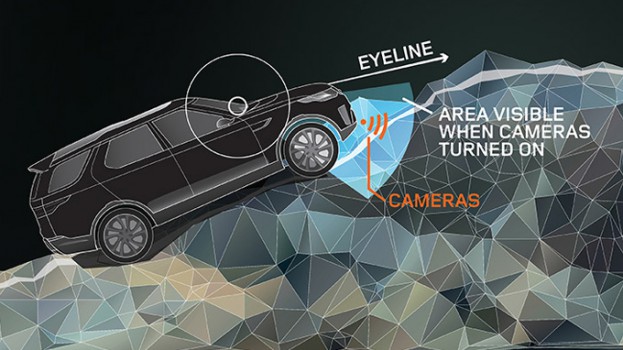 4×4-ists among you will know exactly what I’m talking about when I say that sometimes it’d be great to have eyes on the front bumper. There’s nothing more nerve-racking than passing over the pointy bit of a steep, rocky incline not knowing what lies in wait on the other side.

What I didn’t realise though is that ‘driveway deaths’ is an actual thing. Apparently people manage to kill themselves while navigating their domestic driveways in big, family SUV’s due to a lack of visibility. While you might think that such a death occurs while reversing, you’d be wrong. Studies, and yes this has been studied, show that 40% of driveway related deaths occur while travelling forward.

So, the ability to see what’s in front of you is actually quite important; and not only while bashing about the outback.

Thankfully the blokes at Land Rover have us a solution. The aptly, but rather boringly named Transparent Bonnet makes the front of the car ‘virtually’ invisible to the driver. Such witchcraft is accomplished by using cameras located in the vehicle’s grille to capture real-time video that is projected onto the windscreen using Heads Up display technology. It’ll also show you what the front wheels are doing based on steering angle.

I understand that the concept sounds rather-too-James-Bond-y; that was my first impression anyway when the story first came to light. However after watching the video on YouTube I’ve become quite a fan of the technology. Not so much because I fear falling off the edge of my driveway, but this is a must have for off-road enthusiasts who aren’t keen on the whole “jump out and inspect every obstacle” malarkey – of which I am one.

I’m also convinced that this will lead to a myriad of other similar aids that will benefit on and off-road safety which is always a good thing. In the words of Dr Wolfgang Epple, Director of Research and Technology for Jaguar Land Rover: “We believe the next 25 years will be the most exciting and dynamic the automotive industry has ever experienced. There will be huge strides in environmental innovation, in safety and capability.

“As our vehicles become more capable and autonomous off-road, we will ensure the driver has the confidence to allow the car to continue to progress, over any terrain. We are developing new technologies including the Transparent Bonnet to give drivers an augmented view of reality to help them tackle anything from the toughest off-road route to the tight confines of an urban car park.”